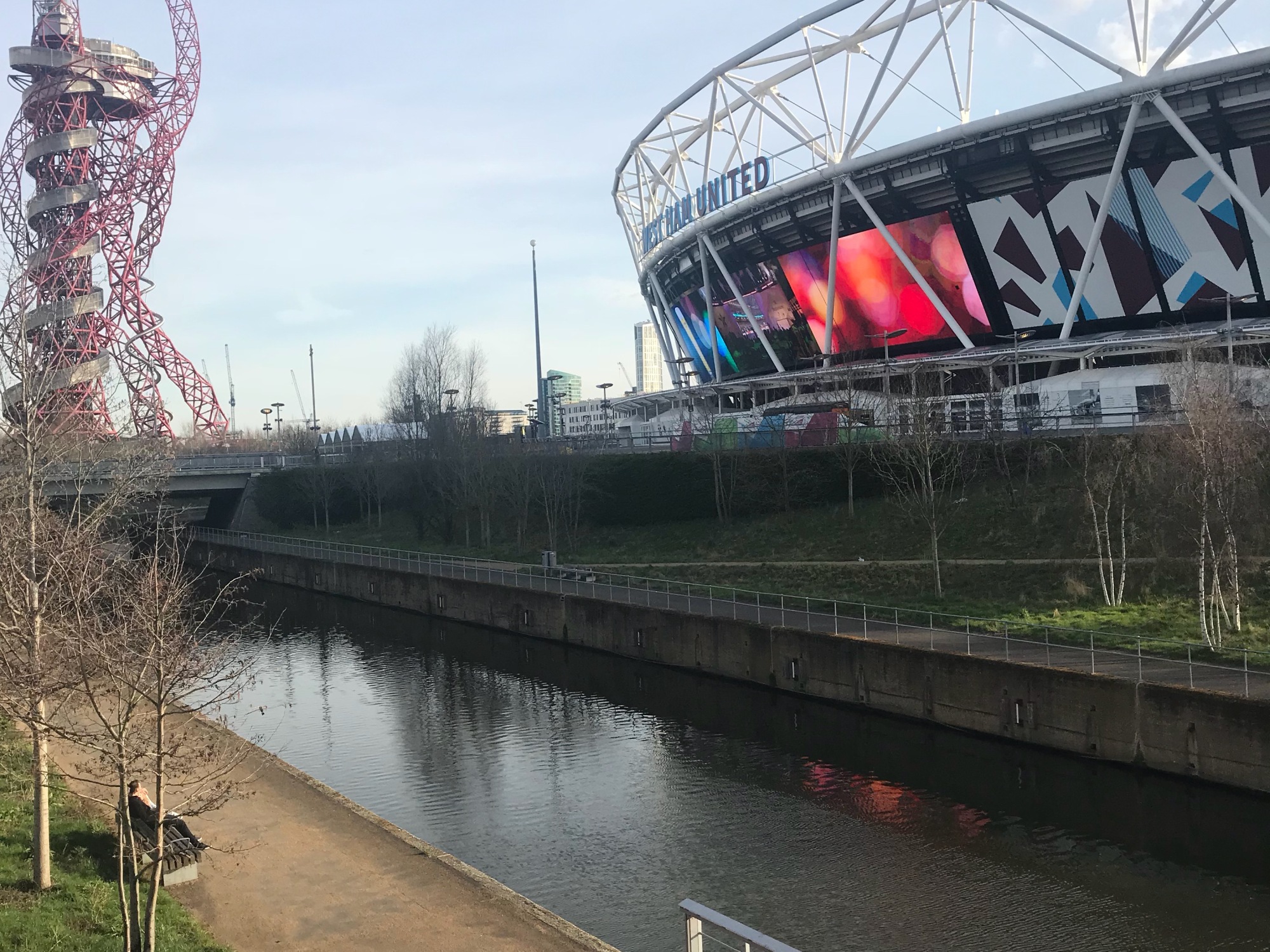 6 years ago East London was transformed after winning the bid to host the Olympic Games. Many promises were made that the Olympics would bring about lasting improvement and change to the local area. For me as a local resident one of the greatest legacies of the Olympic Games is the Queen Elizabeth Olympic Park.

The London 2012 Olympic Games were held in Stratford in East London. Millions of pounds and years of planning enabled this area of London that had long been left and forgotten to be majorly redeveloped into an exciting and beautiful new part of the city.  The Olympic Park area has come to have its own postcode (E20) and is now a sought after place in London.

The Queen Elizabeth Olympic Park was officially opened in 2013 and provides a 102 hectare permanent public park for all to enjoy. 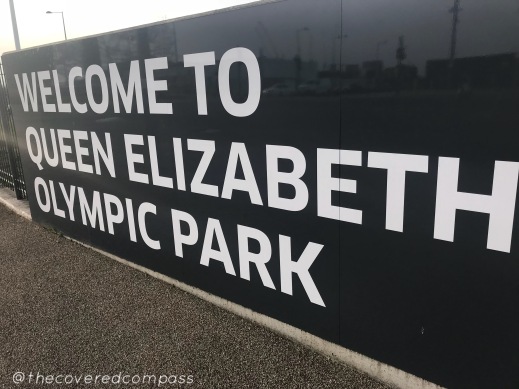 Getting There: Public transport is the best way to get to the park.  The park is a few minute walk from Stratford Station. Stratford Station is the 19th busiest in the UK and has the Central Line, Jubilee Line and DLR line and Overground trains running through it. Directions to the park are well sign posted all around the station. A number of main bus routes stop close to the park including the 388, 108 and 25 bus routes. You can also easily cycle to the park from all over London.

You can also drive to the park but finding parking near the park can be tricky. The nearby streets are mainly resident parking particularly during the day. Some of the sport centres have on site parking that you have to pay for. There is also the Westfield Shopping Centre where you can pay to park.  There is accessible parking bays within the park by those with disabled badges.

The Park covers a large area and therefore has many different entrances and ways to travel to it. The official address of the park is: Olympic Park London E20 2ST. For information about the best way to get to the park check out the official park website – http://www.queenelizabetholympicpark.co.uk/the-park/plan-your-visit/getting-here

Price: The park is totally free to visit and in my opinion is one of the best free things to do –  particularly in East London or if you have children.

Opening Times: The park is open 24 hours and monitored at all times by on – site security teams.  You would have to check the website for opening times for the individual sports centres. 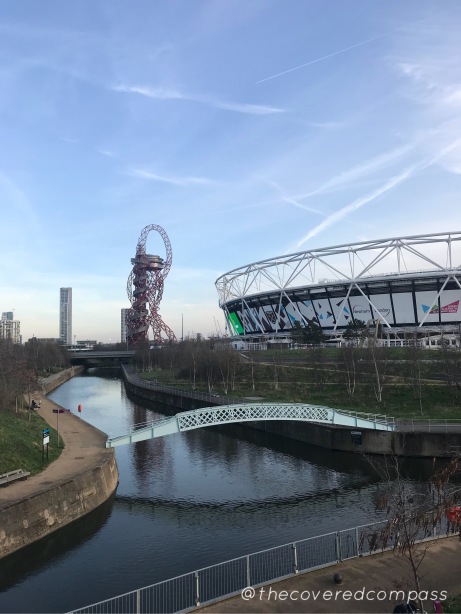 The River Lee runs through the park and the park has been designed into different sections and area. This includes the sporting sites for example the Copper Box Arena, the VeloPark and the Aquatics Centre designed by the incredible architect Zaha Hadid. There are a range of different play areas for children to have fun and explore including the Tumbling Bay Playground, climbing walls and water fountains. There are also different paths and trails for walking, skating and cycling along. The park is overlooked by the ArcelorMittal Orbit, an observation tower and Britain’s largest piece of public art. 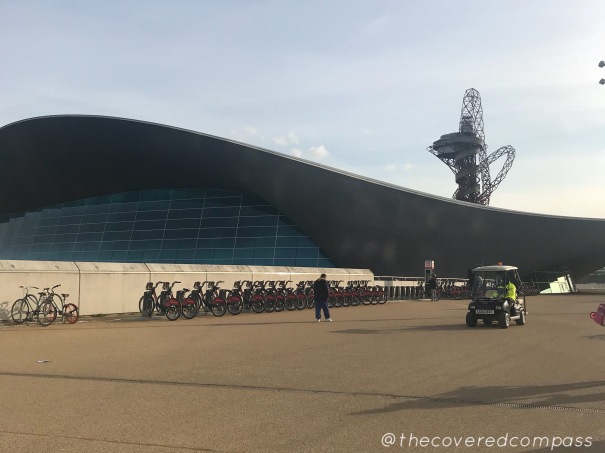 The park has been landscaped and designed to be sustainable and green and has a number of lovely gardens and meadows.

There are also lots of opportunities to be active within the park including public swimming sessions in the Aquatics Centre, Badminton and Basketball at the Copperbox Arena and cycling around the Velodrome.  You can also slide down or abseil off the side of the Orbit structure if you’re looking for an adrenaline rush. 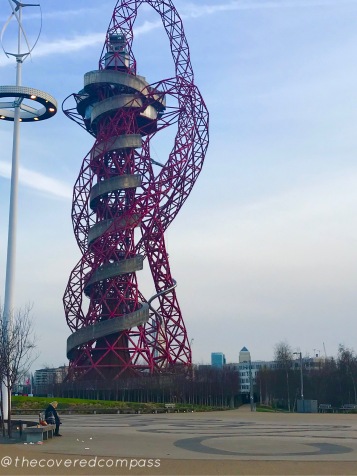 There are always lots of events going on at the park including entertainment and sports events. There are also a  huge range of paid and free family activities on offer particularly during the summer holidays. For an up to date list of events check out their website – http://www.queenelizabetholympicpark.co.uk/whats-on/events

The area around the park has also been greatly developed and has lots to offer and explore. This includes the Theatre Royal Stratford East and Westfield Shopping Centre which has a range of shops, restaurants and entertainment.

The park can get busy, particularly during the summer months. There is however lots of space around the park and you can usually find a quiet place – particularly if you move away from the main Westfield entrance.

There is plenty of space to bring your own food and have a picnic in the park. Within the park itself there is the Timber Lodge Cafe and The Last Drop Restaraunt where you can get food from.  Along the outskirts of the park in areas known as ‘Here East’ and ‘East Village’ are loads of great places to eat including The Breakfast Club. There are tons of places to eat within the Westfield shopping centre. 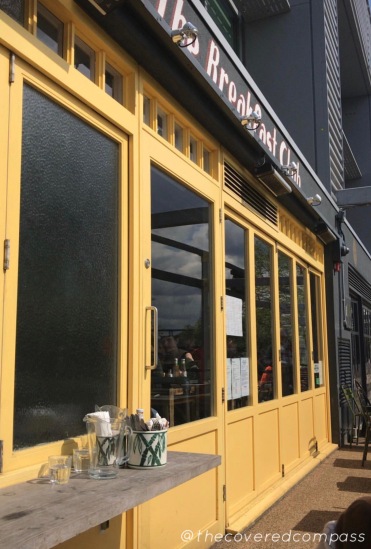 Final Thoughts: As you can probably tell from my blog post I am a big fan of the Queen Elizabeth Olympic Park. For me it is one of the best and lasting legacies from the London 2012 Olympic Games. The park is open and accessible for all to enjoy and is a real treasure in East London 😀